Customers will compare ads shown on Fire TV against the cover-art imagery that fills the rest of screen, so the design standards are set to align with nearby content. Treat the Fire TV inline ad creative as a piece of recommended browsing.

When looking at the top of the Home section, the inline placement is shown at the bottom of the screen and may be selected when a customer navigates down the page.

Testing your Ad Creative on TVs

Each ad should be previewed on a large tv screen, where minor imperfections and misalignments are magnified and can be more easily identified.

TV screens have extremely varied responses in terms of viewable screen area, color saturation, hue shift, and visible detail. These inaccuracies are considered an acceptable cost/value tradeoff and are present at some level on most displays.

Bright and highly saturated visual elements, which would otherwise inappropriately steal focus from the rest of the elements onscreen, must be toned down.

As the customer navigates down the page, tiles gain focus with a glass-like border. The ad banner does not expand upon selection. 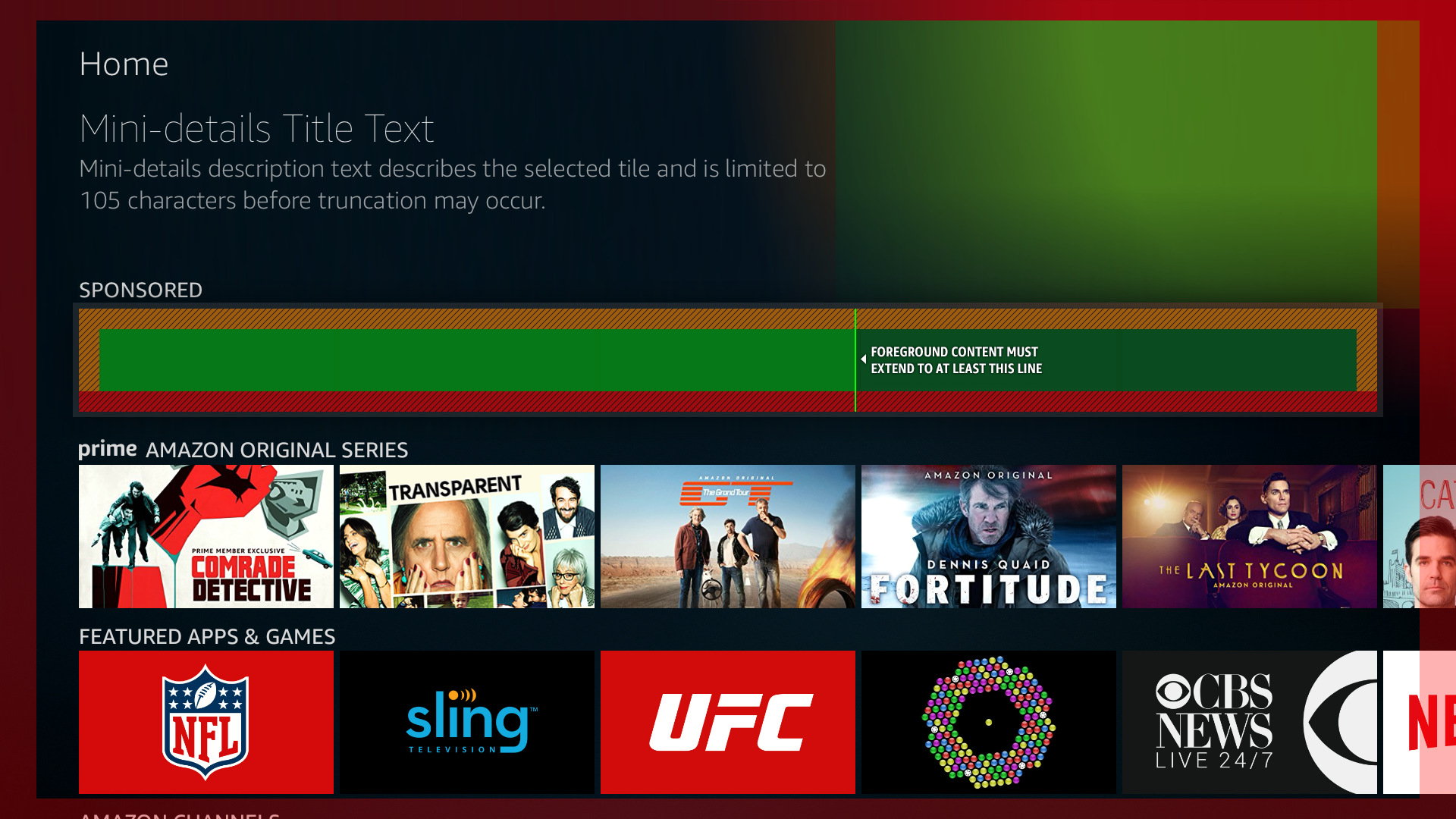 When the ad is selected, additional information about the content is revealed in the “mini-details” area that occupies the top third of the screen.

Title text:
Use the proper title of the advertised content or create a simple name that summarizes the experience that will be available to the customer after engaging with the ad banner.

Description text:
Summarize the promotion details and communicate what type of content is being promoted.

Background Image:
The 980 x 551px background image supplements the visuals that are included within the ad banner.

Inclusion of text in this image asset is discouraged, to limit the complexity of ads. Text may be used only in the following cases and will count against the banner’s 12-word limit, unless otherwise noted: 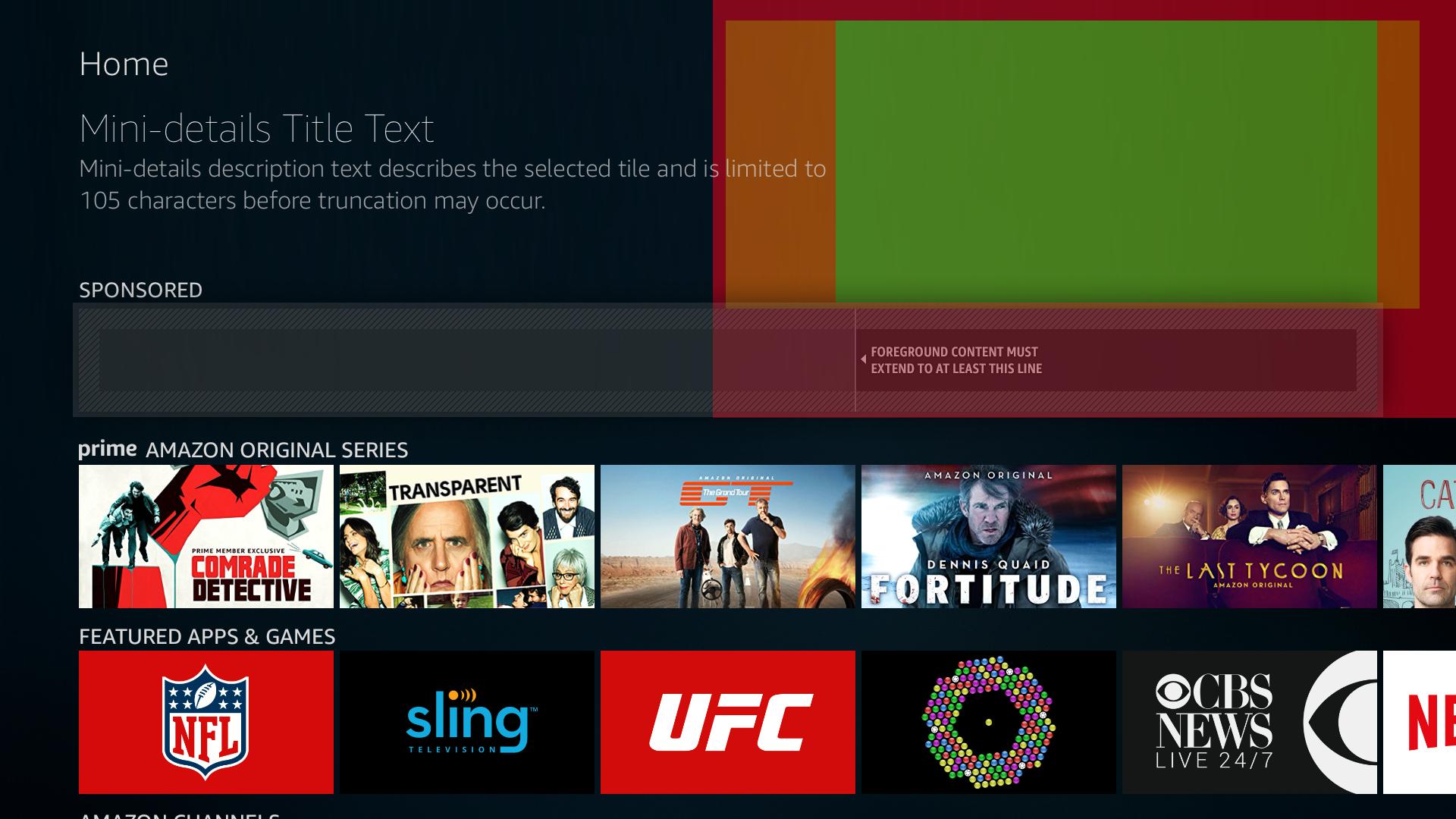 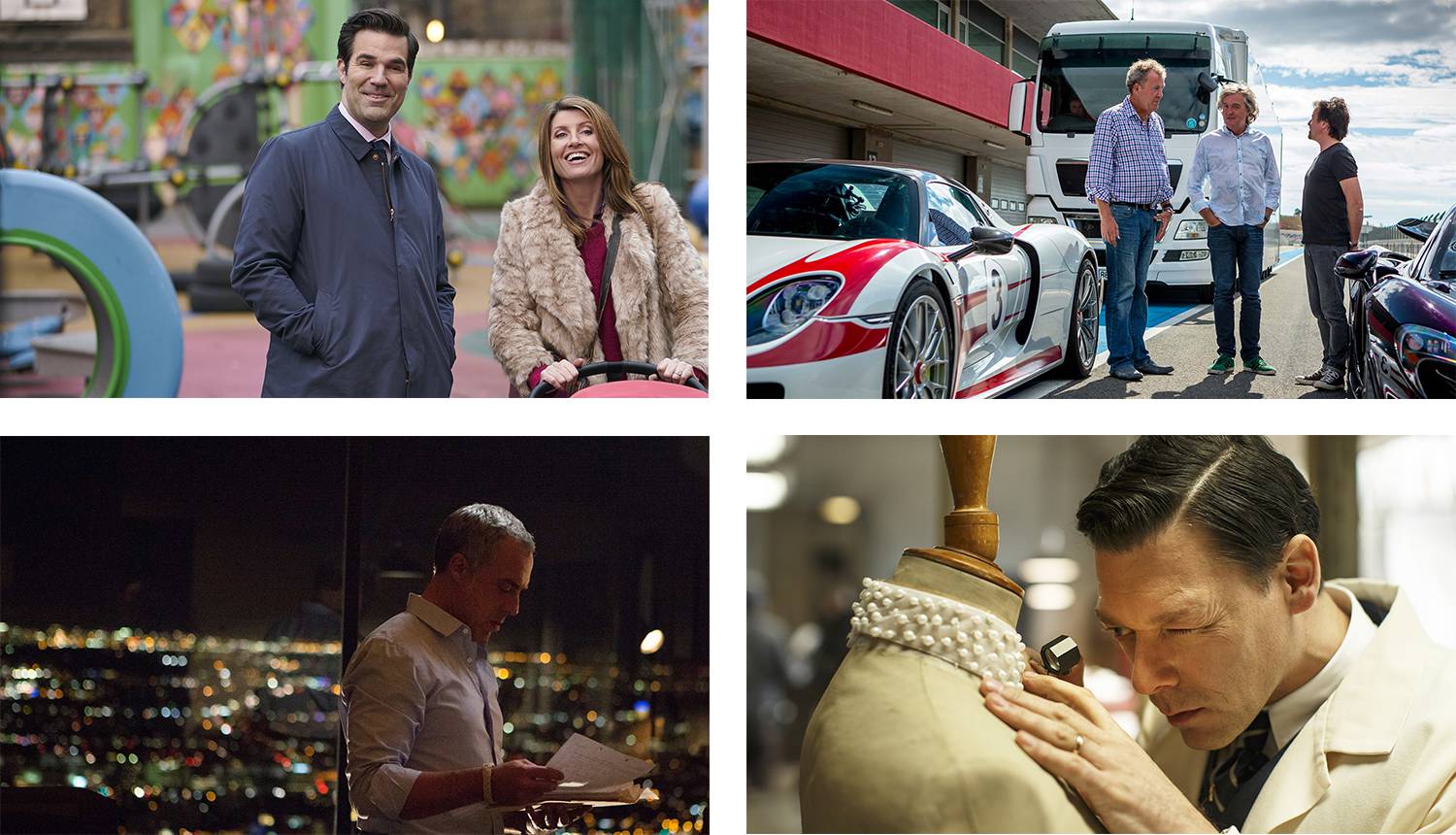 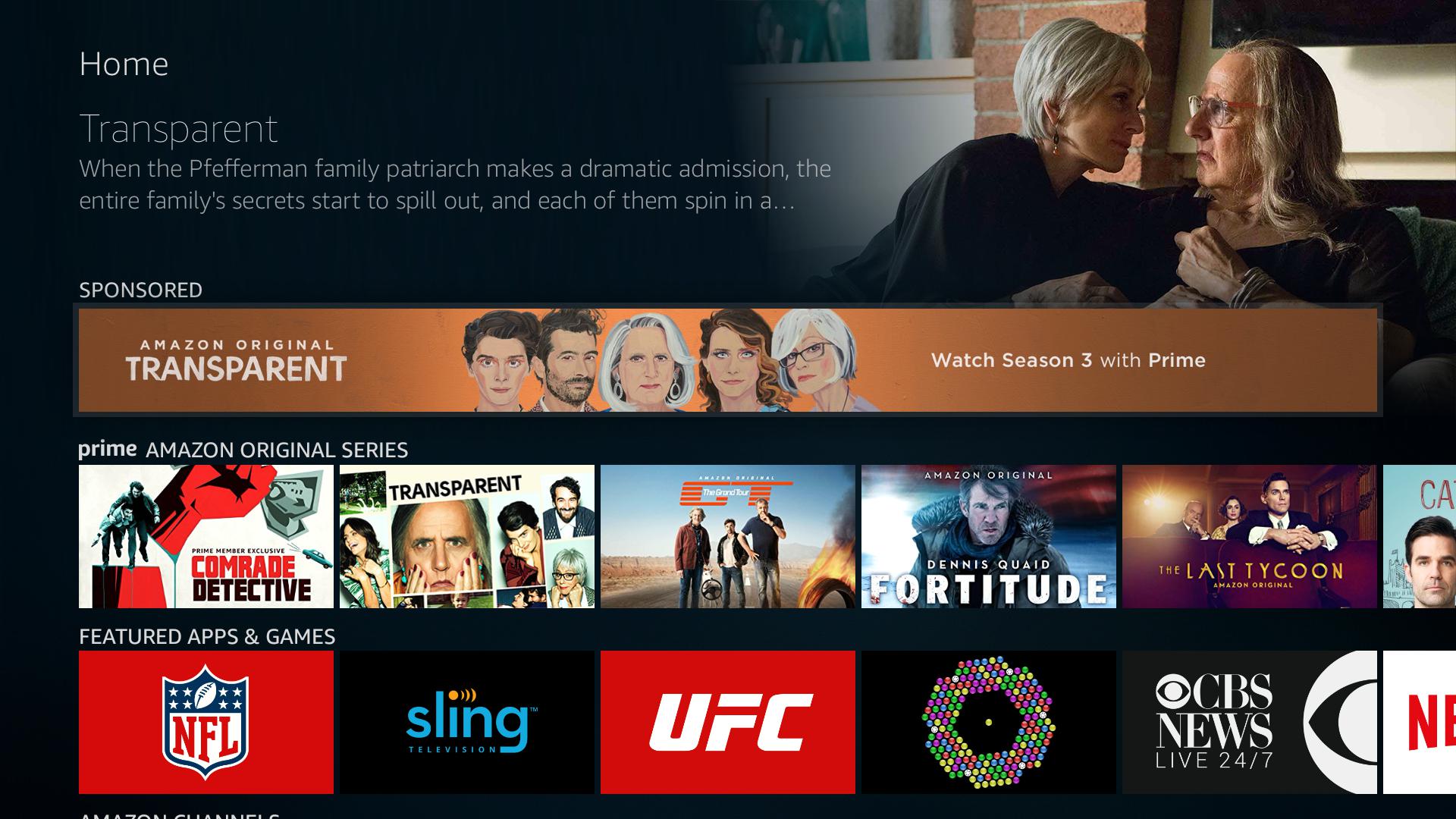 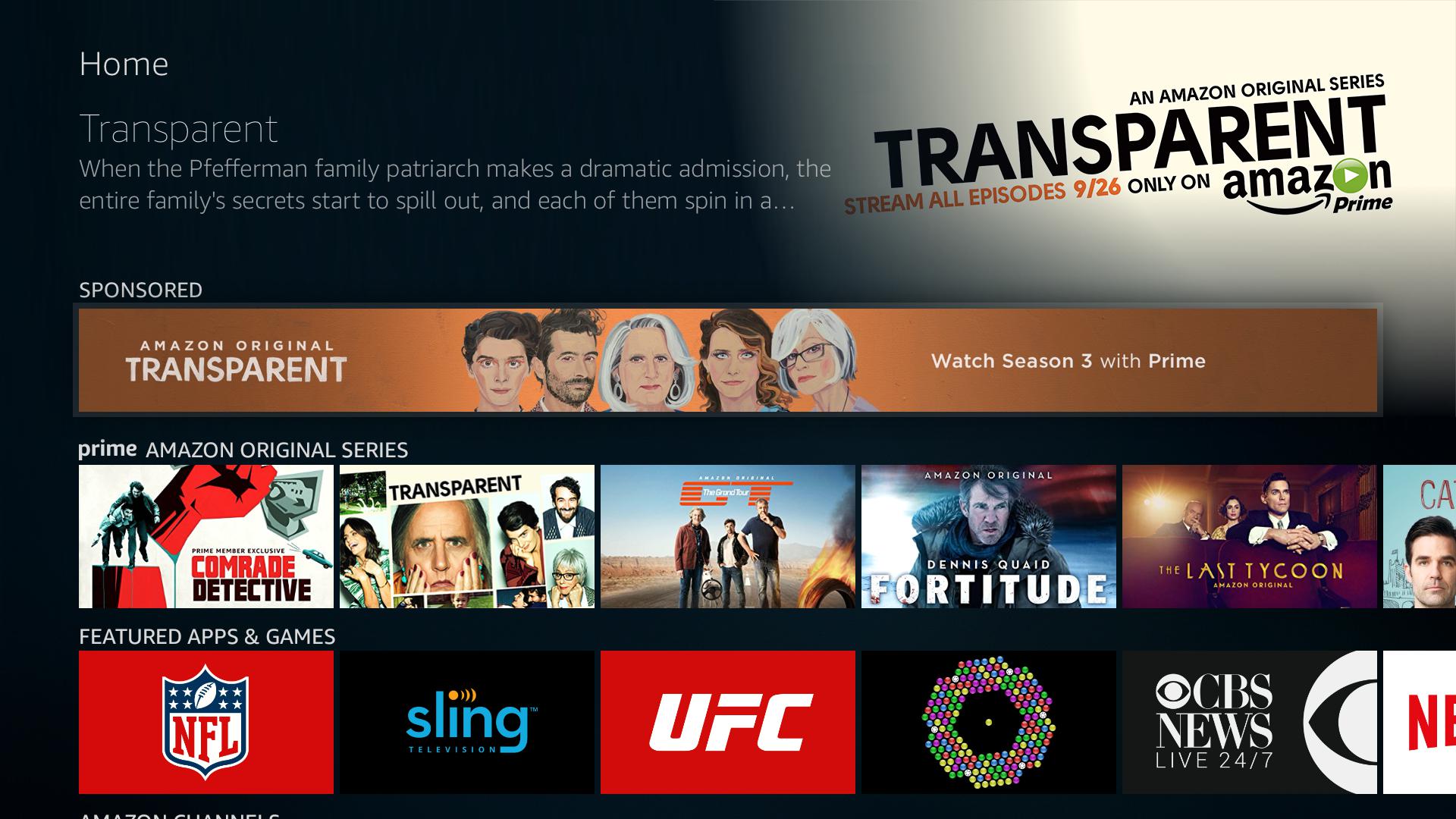 The background image in the approved ad is well cropped and features human imagery.

The background image in the not approved ad should not contain prevalent text, is busy with content, and does not have a strong focal point.

Auto play video: (optional)
When a customer hovers over the banner, text and image detail content is revealed in the top half of the screen. After one second, a video can replace the imagery and begin to play with audio enabled. After the video concludes, the image is shown again.

The 1920 x 1080 video content should be short (10 – 30 seconds), engaging, and inspire the customer to click through to additional content. Treat the video as a fast overview of the advertised product. Use compelling imagery and motion to show an overview of the content.

TVs commonly crop a few pixels from each edge of the display. In the home screen’s default state, the ad is positioned at the bottom edge of the screen.

The bottom 27px of the banner area is restricted to ensure that important content is inset enough to be viewable. The top and right edges of the mini details background image are also restricted, by 27 and 48px respectively.

Additionally, to avoid visual conflict with other onscreen tiles, the safe zone restricts content 27px from each edge of the banner.

Composition & Clarity
Make sure that the promotion can be understood at a glance, from the content of the banner alone.

The banner must appear as a continuous unit; do not divide it into distinct sections.

Blend foreground elements with the background content of the ad, creating a cinematic stripe:

In this example, the imagery of an approved ad is blended into a panoramic composition. The characters appear naturally within a scene.

The characters in the not approved ad look cut out and are not blended with the background. There are harsh divisions in the background and issues with the comparative scale of elements.

Background Content in the Banner
The background of the ad banner should be as visual as the assets allow, spreading imagery across the full length of the ad whenever possible.

If the framing of available imagery is unsuitable for the area, try one of the following methods to fill the placement’s length:

Embedding Text in the Banner
Do not include any information within the banner image that isn’t essential. Highlight product features, not product IDs.

Try not to stack lines of text. Strongly avoid stacking more than 2 lines.

Typographic limits
Based on Amazon Ember and Kozuka Gothic typefaces at regular weight:

Word/character counts include all characters and logos within the tile imagery, other than those which are embedded in the primary logotype or lockup.

Whenever possible, use the recommended font size of 32pt Ember Regular, to maintain consistency between advertisements.

Calls to Action
To ensure that customers can easily understand the promotion, call-to-action text should be included both in 1) the banner as a short phrase and 2) the detail text of the mini-details as a part of a sentence. It may be omitted in only one of these locations, if necessary.

Accessibility Text
This text is dictated to customers who use Fire TV’s screen reader for accessibility and is limited to 128 characters.

Row Header Text
Rows within the browsing interface on Fire TV are separated by row headers which title the content of the row. The header above the banner placement displays the text, “SPONSORED”, and is not configurable.

Alcohol
Alcohol ads are prohibited in the US on Fire TV. For requirements in the UK and Germany, see the Creative Acceptance Policies. Inclusion of text based on those requirements may be excluded from the text limit.